One of the darlings on our farm is sweet Clementine. This old girl is, well, just that…. the granny on our farm. You’ve got to start somewhere when you embark on any journey in life, and she pretty much represents when our raw milk story took the ginormous step from simple consumption to full throttle buy in.

Clementine was my birthday present more than 10 years ago, and our second milk cow. We were still ‘young’ in the learning about all things cow, handmilking, etc. Dairy cow husbandry is equal parts skill, art, instinct, commitment and passion. If you find you lack in any of these areas (as many do), your stint as a dairy cow guardian will likely be short lived. Mistakes, ignorance, or lack of commitment can easily cost a cow her life…. or at the very least,  permanent damage to her udder.

In the beginning, I read books, watched videos, talked to everyone who knew anything about handmilking dairy cows. We ‘hired’ a teenage homeschooled young man to teach us hands on rudimentary skills and very basic knowledge of dairy cow care when we bought our first handmilked Jersey from his family. Bonnie (short for Mooey Bonita) was a pretty girl and, by cow standards, pretty patient with our ignorance. We learned much from her. (She was with us for several years before unexpectedly passing away in the middle of the night. )

Owning one dairy cow does not make you an expert. Heck, honestly, it was a few years before I felt like we had ranked up from beginner to novice. It was about that time that we decided to expand our herd of one. This time, we felt like we ‘knew what we were doing’ when we drove 4 hours south to buy a cow which was part of a herd of culled commercial dairy cows. The owner of this herd was a woman who likely recognized that we were blissfully ignorant when it comes to cow shopping (much like a used car salesman probably perceives a first time car buyer…. with a mixture of glee and predatory guile).

Clementine was huge! She is a big Jersey….. but I’m talking about her udder in this case. Not just large… but massive. We commented on how big her udder was, and our cow salesperson told us that the reason for that was because she was still in milk production.

“Notice the large and long teats (a good thing), and the placement of them (also a good thing)….. and only ‘probably’ 5 years old. ”  ….. all important amenities of a handmilked cow.

We were told she would be an excellent source of bountiful and copious amounts of milk. Just look at her udder size. Clearly. The poor girl looked like a bovine version of Dolly Parton. Thinking we had just hit the white gold jackpot, we wrote our check, loaded her up, and headed home, really having no idea what we had just bought.

Despite our ignorance, Clementine turned out to be an enormous blessing, and our experience with her has allowed us to rank up from novice to advanced proficiency in all things ‘dairy cow’.   An animal raised in a commercial farming industry (as she had been), does not usually receive daily rations of kindness and compassion. They are viewed as a commodity and either an asset or liability. If they fall below the line distinguishing those two, then they are typically sold or destroyed. There is no room for ‘slackers’ in the the factory farming business.

Clementine’s udder was her downfall, AND her saving grace. We found out much later that her enormous udder was a physical defect caused by laxity of the suspensory ligaments. What we thought was a goldmine (her udder) was, in actuality, the reason she was culled from the commercial dairy herd. It was actually a time bomb. The lower an udder hangs, the greater the odds of mastitis due to injury (kicking herself as she walks), and the harder it is for a calf to nurse. Had we not purchased her, she likely would have been sent to the processor.

Like bygone versions of Miss America pagents, dairy cows are given scores on their udders…. only the opposite is true. Bigger is not better, and will, in fact, get you culled. In her case, Clementine had maxed out the scale (a 5 is rated as the worst).

When we bought her (and her defective udder), we only saw a sweet faced cow that looked our way when the other cows in the herd wanted nothing to do with us. We saw a cow that was willing to learn to be handmilked if we were willing to give her a chance. True, we also thought we had a pretty darn special udder attached to that cow….. not knowing that it was ‘special’ in a totally different way.

I’m not even sure when I realized we had been duped, but it was probably a couple of years into our life with her. Just like women have different bra sizes, cow udders are…. well, ‘udderly’ different from one another. Bonnie was an average ‘B’ cup when not in milk, but Clementine…… her udder just seemed to stay

‘DDD’ regardless of the season. The internet is a wonderful thing, and sometimes you just don’t know what to look for until you start looking. Curiosity got the best of me on this topic, and that’s when I found out (and narrowly avoiding a few rounds of mastitis in the process) what her problem was. Secondly, she was also at least a few years older than we had been told at the time of sale.

And yet. Thank God we picked Clementine and her defective udder. She has been the advanced training guide we needed …. life isn’t simple or easy when it comes to cows, and Bonnie had been both of those. We had no issues, and didn’t really have any concept of  what warning signs, symptoms, and dysfunction

might look like. Experience is a powerful educator.  I’ve honed my holistic animal husbandry skills considerably in the last decade (thank goodness for Young Living oils and Animal Scents Ointment!). But in addition to the considerable education that sharing our lives with Clementine has granted us, she has proven to be a remarkable ‘spokescow’ for the family milk cow world. She is beautiful, photogenic, paintably cute, Miss Congeniality, and…. above all else….. kind. She has been a tremendous mother and auntie to calves, and is quite the greeter on our farm.

Last year, it became obvious that her udder simply could not take another pregnancy. One the scale of 1-5, her udder was a 9. By our calculations, her estimated age is around 18 (the average lifespan of a commercial dairy cow is 5-7yrs. )

I’ve posted about the realities of farm life on my blog, but there are times when emotions defy logic and financial prudence.  No worries ya’ll…… Clementine is here to stay. 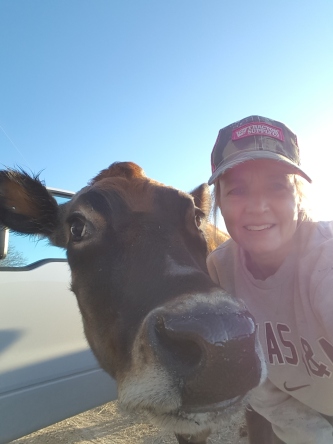 She is one of our mascots……. Still ‘aunt-ing’ calves, still greeting, and ready to photobomb whenever she can. We are making her retirement as comfortable as possible for her. A discussion with a vet at Texas A&M rejected the possibility of an ‘udder reduction’ surgery (way too risky). Her udder is pendulous,perilous, and ultimately, it probably will cost her her life someday.

Awhile back, one of our friends jokingly sent me an article on ‘cow cuddling‘, apparently the newest thing in psychotherapy. Believe me, I think there’s merit to it. Clementine, among others, are probably what keep me sane some days! Heck, at an average going rate of $300/ 90minute session (according to the article), maybe she’d be interested in a late in life career change?!?!?   It’s never too late to teach an old cow new tricks!

Hugs and Love, Liz (and Clementine)

*Kudos to Kim Guthrie Art for our artwork. (Doesn’t she do amazing custom work?)